Our ear canals are self-cleaning. As we move our jaw to eat and talk, the wax and skin cells move slowly from the eardrum to the outer ear where it naturally falls out.

The waxy material is produced by glands inside the ear and its purpose is to protect our ears by trapping dirt and repelling water. It keeps the skin in our ear canal healthy, preventing it from drying and cracking. It also helps to prevent infections. 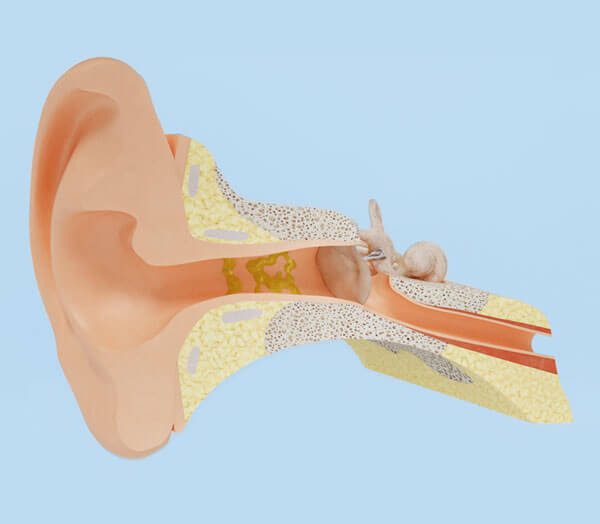 Some people naturally have more earwax in their ears than others. However, you could also have excess earwax build-up because you have hairy or narrow canals, you’re older (wax gets harder and more difficult to fall out as you age) or because you wear hearing aids, earplugs, helmets and other devices which potentially push the wax further in.

A blockage can often cause several symptoms such as; earache, difficulty hearing, itchiness, dizziness, ear infections and tinnitus.

Caring For Your Ears

You can’t prevent earwax, it’s a normal bodily secretion which provides protection for your ears, preventing dust, dirt and foreign bodies from entering the ear canal and causing damage to the eardrum or delicate lining of the canal itself.

Your ears are self-cleaning and to help prevent complications you shouldn’t insert small objects such as cotton buds into the ear canal. This will only push the wax further down the ear canal and block the ear.

If you have repeated problems with wax, using ear drops or olive oil drops warmed to body temperature could help soften the wax and help it fall out on its own.

If you have a persistent problem with wax, two drops of olive oil instilled at room temperature into the affected ear may be beneficial in aiding its removal. Here is our step-by-step guide to instilling ear drops:

You can buy olive oil in a dropper bottle from your pharmacist. The olive oil used in cooking can also be used provided you have a clean bottle with a dropper.

Complete our online booking form or contact us for more information.